Trending
You are at:Home»Recipes»Fast Food»Pav Bhaji
By Hilda Mascarenhas on July 28, 2011 Fast Food, Indian, Recipes, Vegetarian
Pav Bhaji  can be savoured whenever one feels like it. The preparation is simple but the trick lies in the awesome, aromatic blend of spices in the masala. Each household may have their own signature recipe. It can be prepared with a combination of assorted vegetables of your choice. When I see the Pav Bhaji being prepared at the entrance of a restaurant or a wayside stall, I just can’t help but go ahead & have some. I love the sight of the bhaiyya with the huge cast iron tawa, those colorful vegetables & the packets of Amul butter around him. I enjoy watching him sauté the vegetables, mashing them, adding those wonderful aromatic spices, mixing them with dollops of butter, dishing out the sizzling mix of vegetables & the pav fried with enormous amounts of butter. The sounds of the cast iron ladle on the tawa is sweet music to the ears. The most delectable Pav Bhaji we enjoyed was when we went on a holiday to Karla Resort at Malavli but unfortunately the stall no longer exists.I love making it at home too. Here’s this amazing recipe for you to try & enjoy.. 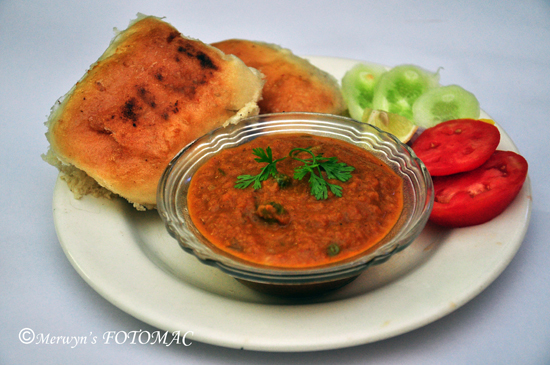