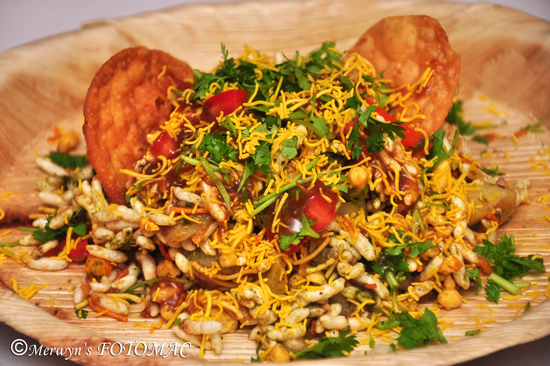 Bhel Paapdi Puri is always inviting & delicious. It is difficult to resist from eating it. The main taste in the Bhel Puri is the spicy (teekha) green chutney, the zing of the fresh garlic chutney & the sweet tangy imli khajur chutney. The chutneys play an important role to balance & bring out the true flavor of this chaat. The paapdi puris add a new dimension to this popular Bhel Puri. Raw mangoes in season gives the added tang & crunch to it. This food is tantalizing & addictive. It is also a favorite in Mumbai as well as Pune.
I have fond memories of relishing Bhel Paapdi Puri as a child.. I still distinctly remember the Bhel Puriwalla who came with his cart everyday to the place where I lived. He was Maharashtrian. He wore his traditional dhoti-kurta & Gandhi topi. He wore impeccably clean white clothes & his cart was very clean. He also sold chikki which he weighed on a little scale used by goldsmiths.
He was always on time. I used to enjoy watching him mixing the bhel. His chutneys always had the right blend & he knew exactly the way I preferred it. I would eat bhel almost every day. He was like a pied piper with all the children crowding around him.
If I missed out on certain days, he would come home & ask for me. Sometimes he would give me a free treat! His son still sells Bhel Puri but it is not the same..
I used to love the Bhel Puri at Juhu & Band Stand (Bandra) too. The preparation in Mumbai is not the same as Pune. The Bhel Paapdi Puri at the famous in Pune was known to be the ultimate. It was sold on a cart & the man was known as “Anna.” There used to be huge crowds to eat the bhel & the various chaat he prepared. People had no patience; there would be a lot of jostling as he was located near a public garden. Now he has a shop & still has his cart too.
Bhel Paapdi Puri will always remain an evergreen favorite! Here is my version of this popular chaat for you to relish.. J
Ingredients for each Serving:
1 cup Kurmura/ Murmura/Muri (Puffed Rice)
1/3 cup Sev (fine dry nylon sev)/Chick pea vermicelli snack
¼ cup Mixed Farsan
3  Paapdi Puris ( lightly crush with hand)
3 tbsp. Potatoes (boiled, peeled & diced finely)
2 tbsp. Onions (peeled & chopped finely)
2 tbsps. Tomatoes (finely chopped)
1 tbsp. Raw Mango (finely chopped)(optional; in season)
A pinch each of Red Chilli pwd., chaat masala & salt
1 tbsp. each of fresh Green Chutney & Garlic Chutney (optional)
2 tbsps. Sweet Date & Tamarind Chutney (Imli Chutney)
Garnishing :
A handful of fine nylon Sev
A handful of fresh Coriander Leaves (chopped finely)
A tbsp. of Imli Chutney
2 Crisp home made Paapdi Puris (or ready made)
Procedure to make Bhel Paapdi Puri
First lightly roast the kurmura if it is not crunchy.
In a sufficiently large bowl, put in kurmura,crushed paapdi puris, nylon sev, mixed farsan, chopped onions, tomatoes, potatoes, raw mango, a pinch of red chilli pwd., chaat masala & salt. Mix well quickly with a spoon. (Preferably wooden spoon).
Add green chutney, garlic chutney & sweet imli chutney. Again, mix together quickly. Serve immediately in a plate garnished with a generous helping of sev, chopped coriander leaves. Lightly top with imli chutney.
Enjoy with crisp & crunchy home made paapdi puris.
Share this post Twitter Facebook Pinterest Tumblr Email